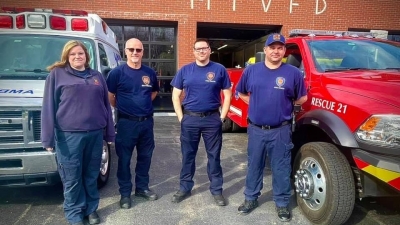 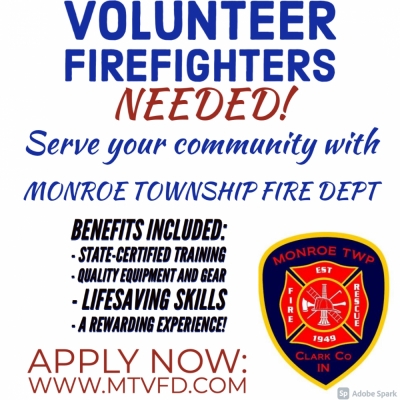 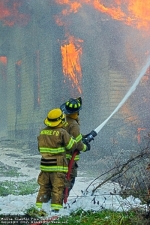 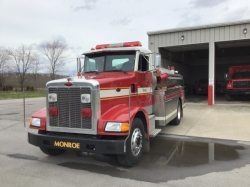 Member login
Birthdays for September
No birthdays this month
Links
Charlestown Fire Department
Charlestown, Indiana Fire Department
Jackson Township Fire Department
Nearby Jackson Twp Fire Dept in Washington County. This is a link to their Facebook page.
Milton Fire and Rescue
Website for the Milton, KY Fire Department
Advertisement
Call history
House Fire on Hwy 160 West
On July 10th, 2011 at 0814 hours, Monroe Township Fire Department was dispatched on a report of a structure fire with fire showing through the roof, in the 11000 block of SR 160 West of Henryville. While responding, dispatch provided additional information stating that only smoke was showing and not fire. Engine 2022 arrived on the scene nine minutes later at 0823 under the command of Lt. Lonnie Ater. The structure was a two-story, single-family dwelling undergoing heavy renovation and unoccupied.

Deputy Chief Dunlevy (2002) arrived on scene and assumed command.
First-in crew (Lt. Ater and FF D. Hall) stretched a 1 3/4" handline and began to make entry through side Delta, but decided to use side A (front door) due to unstable porch roof over the D side. Upon entry of front door, crews discovered what looked to be a room and contents fire and quickly knocked it down. After fire knockdown crews began to open up ceilings to overhaul and check for exposure. It was discovered that the fire had extended into the walls and 2nd floor of the structure. Lt Ater then took a crew and 2nd line to the second floor and found extreme heat and fire extension into the attic area. By this time, additional engine companies had arrived and accessed the roof for ventilation. FF Branaman and FF Harris were in the process of cutting a vent hole when the fire self-vented and forced evacuation of the roof. Due to heavy fire conditions and weakened structure integrity, a defensive attack was initiated.

During the incident, one firefighter (Lt. Ater) suffered an injured ankle and was transported to the hospital.Several other FF's were treated at the scene for heat exhaustion due to the extreme heat and humidity. Monroe responded with Engines 2022 and 2024, Tankers 2061, 2062 and 2063, and Service/Rehab truck 2051.

Sellersburg, Charlestown and Scottsburg fire departments were requested throughout the incident and responded with water, equipment and manpower. MTFD would like to thank them for their assistance and support. 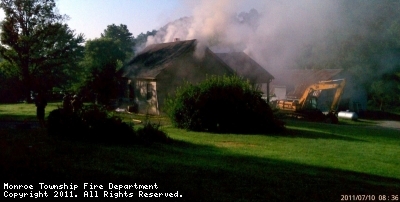 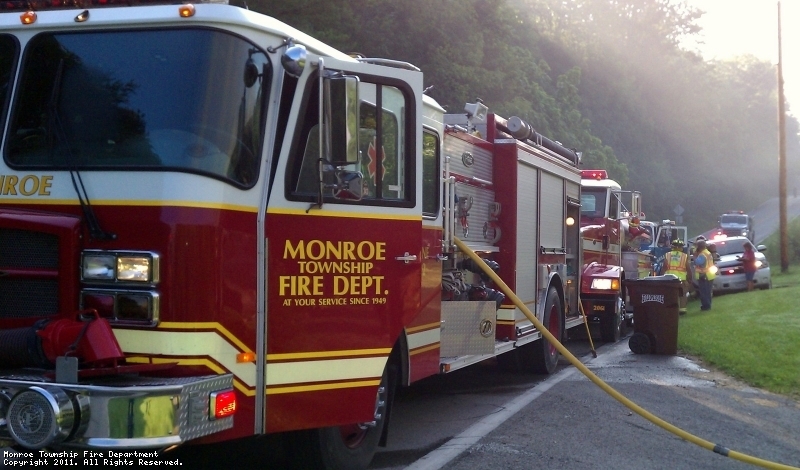 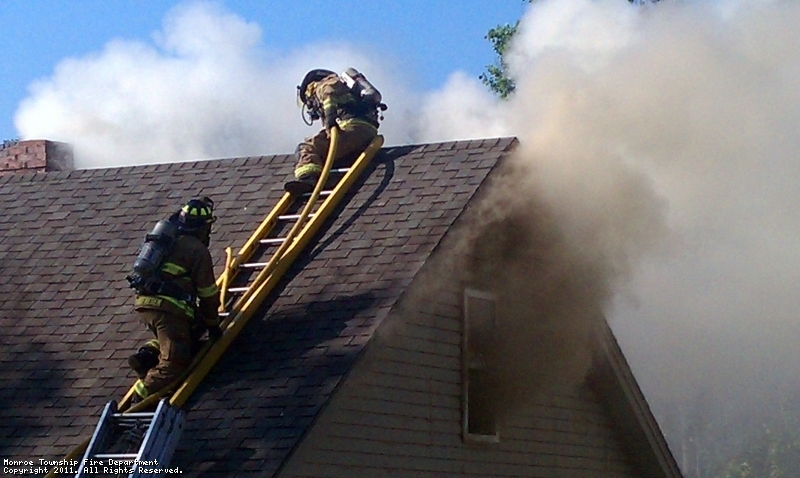 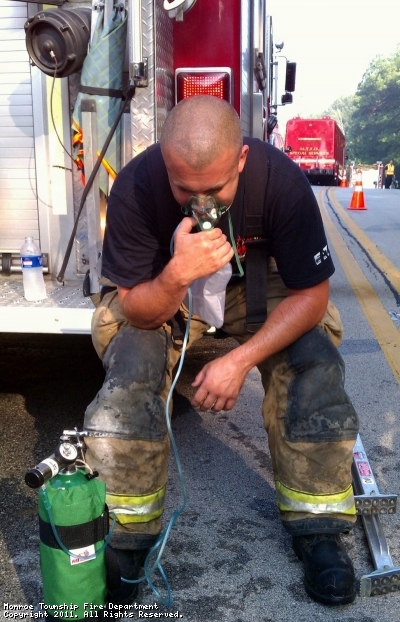 One of several firefighters overcome with heat exhaustion and treated at the scene by Clark County EMS. photo: M.Clevenger 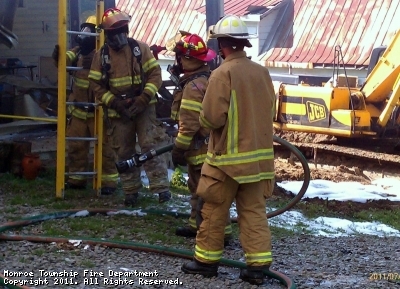 MTFD responded to several grass fires today including one along I-65. Engine 2022 and 2002 responded and extinguished the fire quickly. Due to dry, hot and windy conditions firefighters would like to remind everyone to be cautious about cigarettes and how they are disposed.
➜
Woods Fire

At 1522 hours, MTFD was dispatched to a report of a "tree on fire" in the 600 block of west County Line road. Upon arrival, Engine 2022 reported a working fire in the woods. Because of the dry conditions and location, the fire spread rapidly.
➜
MVA on 160 W

MTFD responded to a single-car MVA on Hwy 160 West. One car left the roadway and struck a tree. MTFD assisted Clark County EMS with patient care and remained on scene until vehicle was removed from the tree.
➜
Barn Fire - Beagle Club Rd

At 1125 MTFD was alerted to a barn on fire next to a residence in the 1300 Block of Beagle Club Rd. Engine 2022 responded with four firefighters under the command of Chief Mark Furnish (2001) and Sgt. Jared Phillips (2106).
➜
Reported Fire at JayC Store in Sellersburg

At 2315 hours, Monroe Twp Fire Dept was dispatched via automatic aid with Sellersburg Fire Dept to a report of a fire in the rafters of the Sellersburg JayC store. SFD arrived on scene to find light smoke in the building but no fire.
➜
MVA on US 31 North

Wednesday, July 13th: At 1726 hours, MTFD was dispatched along with Clark County EMS to a report of a motor vehicle accident on US Route 31 @ Brownstown rd. Engine 2022 responded with a crew of four under the command of Deputy Chief Dunlevy (2002).
➜
House Fire on Hwy 160 West

On July 10th, 2011 at 0814 hours, Monroe Township Fire Department was dispatched on a report of a structure fire with fire showing through the roof, in the 11000 block of SR 160 West of Henryville. While responding, dispatch provided additional information stating that only smoke was showing and not...
➜
Truck Fire

During the afternoon of May 28th, 2011 the MTFD was dispatched to a report of a truck on fire on Caney Road. A CCSO Officer arrived shortly after dispatch and reported that a truck was fully involved and close to a structure.
➜
Severe Weather Standby

Many firefighters were on alert late into the night Wednesday evening due to forecast and predictions of severe weather and tornadoes coming through the area. Crews staffed two engine companies and support vehicles and were prepared with extra chainsaws, lights and tarps.
➜
Severe Weather
MTFD responded to several calls related to a storm that passed through the area around 1800 hours on Monday, May 23rd 2011. Crews removed several trees from roadways around the area and responded to secure the scene around power lines that were taken down by the storm.
➜
Car Fire

At 1735 hours, MTFD was dispatched to a report of a car fire on I-65 southbound near the 23.5 Mile Marker. Chief Furnish (2001) arrived on scene at 1741 with a working car fire. Because of the close proximity to the county line, 911 cell-phone calls reached both Clark and Scott County dispatch cent...
➜
Bedroom Fire